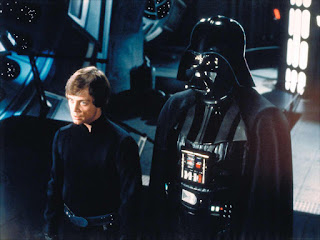 I may need to recant my previous post about Star Wars. I said that "JJ Abrams Doesn't Understand Star Wars" after having seen the trailer for The Force Awakens. Now that I've seen the movie I need to revise that statement.

First, I promise not to spoil any plot points in the new movie. I will, however, let you know some of my feelings about the movie, which might spoil things for some people. You have been warned.

What I Got Wrong

After seeing the trailer all the way back in May, I was worried that Abrams was going to take Star Wars and make it into any other action movie instead of making a space opera film. He didn't use any of the cheesy wipes and the action was so frenetic as to remind me of a Michael Bay film.

I'm happy to say that Episode VII felt like a Star Wars film. I only counted a couple of the scene wipes, but they were there, and the action, while fast paced, didn't overwhelm the characters in the way that other action movies tend to do.

What Abrams did supremely well, was to evoke nostalgia for the original trilogy (Episodes IV-VI). It felt like Star Wars in a way that the prequels (Episodes I-III) never quite did -- fun side note, George Lucas' first wife, Marcia, had an incredible impact on the OrigTrig that was noticeably missing from the prequels.

There were callbacks, references, inspirations, and direct quotes from the OrigTrig all throughout The Force Awakens (TFA). They brought back several members of the original cast and used the iconic John Williams score to further evoke the feel of Star Wars.

And that's the problem. For me there was too much nostalgia. There were too many references. To many ways where the movie was the same thing only slightly different. And yes, I'm talking about both Into Darkness and The Force Awakens.

After having seen TFA only once, I can't make a definitive statement, but I can't recall a single scene without at least one reference or nod to the OrigTrig. It may have only been a setting or a line, but it was so prevalent that it began to distract me from the story.

JJ Abrams is a master at his craft. Period. I can't take anything away from him because I think he accomplished exactly what he set out to do: restart the Star Wars franchise.

The prequels failed in all of the ways that TFA succeeded. Abrams was able to take the mess left to him by Lucas and reshape it into something that feels like my childhood. It feels like watching Darth Vader and Luke Skywalker battle on a catwalk or Han and Chewy fighting Storm Troopers on Hoth or Princess Leia staring down Vader on the Death Star. And that was a great feeling.

But TFA fails in all of the ways that the prequels succeeded (and yes, the prequels did succeed in many ways). While the prequels were hokey and filled with intolerable or unsympathetic characters, they succeeded in telling a new story rather than rehashing the same old yarn with different characters. But TFA doesn't bring much that's new. We have new characters, but the same dualistic fight. We're 30 years into the future, but nothing in the galaxy seems to have changed.

In many ways, TFA feels like a reboot rather than a sequel. It feels like the board has been reset so someone else can tell the story that Lucas did in the 70s and 80s. It feels like what Abrams has done to Star Trek is happening to Star Wars.

As I have grown and learned more about the craft of story, I've had to develop the skills of a critic. The problem is that I often can't turn off that part of my mind, even when I want to. It is immeasurably helpful to my writing for me to be able to see the beats in a story, to see the structure, the character development, and the plot flow. But it's also a hindrance to my enjoyment.

As a fan, as best as I can still separate that part of my mind from the critic, I thought TFA was as good as the OrigTrig, and far better than the prequels in so many ways. I will watch it again, I will enjoy it, and I will own it. I'm a sucker for Star Wars and Abrams has done nothing to undermine that. In fact, he has done a lot to restore my faith in the franchise.

But as an older, wiser, more critical fan, I'm seeing the bones underneath the skin; I'm seeing that Star Wars is more than a story to be told, it's a franchise to be marketed. That was always true of the OrigTrig, I was just too young, too naive, and too much in love with Star Wars to notice or care.
Posted by James T Wood at 10:33 AM