How to Be a Billy Goat in the Wake of Tragedy

Our world suffers tragedy. Often. Trolls use tragedy to stir up conflict but what are billy goats supposed to do? 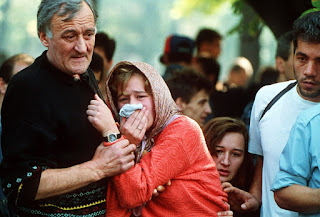 If you want to catch up on why you should be a billy goat you can do so here:


As I sit down to write this the United States is reeling from an attack on a nightclub in Orlando. Fifty people died and fifty-three more were injured. The club, Pulse, is a gathering place for the LGBT community. Responsibility for the attack is claimed by ISIS.

Social media is filled with responses. People are grieving publicly. Emotions are high.

If you want to be a billy goat that means you want to find and cultivate opportunities for dialogue on the internet. You want to offer an alternative to the trolls that do so much harm to individuals and communities. Sometimes that means not engaging.

When our lizard brains are in control, when our limbic system is reacting, when our bodies are deciding if we should fight or flee, we can't really listen. And if we can't listen, we can't engage in dialogue.

In moments of national or international tragedy the limbic system of the internet is reacting. All of social media is running through a fight-or-flight response. There's no space for listening and no space for dialogue.

Just because there's not a chance for dialogue doesn't mean you can't show support for those affected by the tragedy. Grieve. Mourn. Weep. You don't have to be silent in the face of great evils in the world.

As you choose to add your voice to all of the others, show extra care. Everyone's emotions are tender. Everyone is on edge and looking for threats. Do everything you can to not become another threat. Avoid politically charged statements. Avoid religiously charged statements. Find ways to support, to love, to grieve without adding to the fear and anger that are boiling.

But first we need to grieve.

First we need to get past the white-hot pain, that is so intense that we can barely stand to be near it, let alone touch it. First we need to allow our brains to adjust to the new reality of the world that includes this tragedy as a part of it. It might take a few days or weeks before things have calmed down enough for dialogue to happen.

Especially in the midst of grieving a tragedy, there's a tendency for social media to move toward the solution first. While it's possible to have dialogue about possible solutions, there's often a long chain of reasoning that leads to a proposed solution.

We're clearly not united on our solutions, but we can easily unite around the problems. We all want to fix it. We all want to stop tragedies from happening. Start there and see how far the conversations can go. Work to understand why people are so confident of their proposed solution.

But not now. For now just grieve.