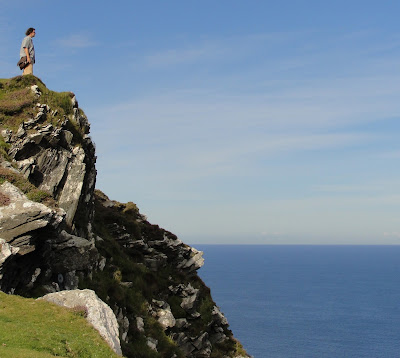 Writing The Exiled Monk took years, not because it was a difficult task to put down words on paper, but because it required me to go to the thin places, where the spirit-realm touches and even intrudes into our own. The Celtic Christians identified these places as holy, that is they were set apart for that purpose. I had to find my own thin places to understand what I was writing about as Peek found the listening places described in the book.

During our time in Ireland where I began writing professionally and had my first images of the story that would become The Exiled Monk run through my mind, I learned how to meditate.

Our host in Ireland, in addition to having a farm with horses, chickens, and a donkey, also taught meditation classes. She invited us to join the classes where she led students through both guided and free meditation times. I hadn't spent much time meditating before. A few church retreats had some meditation exercises, and I experimented on my own some, but I hadn't ever spent so much time in focused meditation. Learning how to sit with my thoughts was important, vital even, but I also learned how to listen beyond myself.

Quick aside, I grew up in a Christian tradition that is highly focused on logic. I heard, on multiple occasions, that I shouldn't trust my feelings because they may have been caused by a spicy burrito as readily as by spiritual forces. Emotions were seen as fallible, weak, and suspect. The idea that God might try to speak to any of us through the Spirit (apart from the bible) was seen as heresy. My head-heart disconnection was due, in no small part, to the fruit of this philosophy. But in Ireland I began learning the strength of emotions, the voice of the Spirit, and the power of the thin places.

I share this because it's a part of my story and that means it's a part of The Exiled Monk, but please don't take this to mean that the book is an attempt at proselytizing or converting anyone to my way of thinking about faith. It's quite the opposite of that, in fact.

During my time in Ireland I met a woman whom I helped with some chores. As we were talking about how I came to Ireland I shared about my education and faith. It's often awkward when I share that I'm a pastor, and it was more so in Ireland where many people have strong feelings about the Catholic Church and the abuses that it covered up for many years. I wanted to explain briefly how I was different than a Catholic priest so I said, "I teach people to read the bible for themselves and come to their own conclusions." She laughed and laughed and laughed at that. When she saw our host again she told it like it was a joke: "Hey, read the bible and figure it out for yourself! Look at me, I'm a pastor!"

Her joking was good-natured, but it shows how odd it can be when a religious leader doesn't demand other people agree. A part of what I learned through meditating and visiting the thin places in Ireland was that faith--real belief--can't be taught it has to be experienced. In writing about religion in The Exiled Monk I wanted to make sure it wasn't a Chronicles of Narnia type allegory for Christianity. I spent time inventing a religion that draws on elements of Judaism, Buddhism, Christianity, Islam, and natural spiritual religions because I don't want to try to tell you what to believe through a story. Instead I want to tell a story about someone who is trying to figure out what they believe and why.

We each have to come to our own conclusions about the thin places. Some of us might find wholly rational and physical explanations, others might engage in mysticism, others still might learn religious practice, and, if you're like me, you'll walk a path that's all of the above and more as you see the strengths and weaknesses in all of those approaches to life. In many ways The Exiled Monk is a story about what it's like when everyone else thinks they know the right path for you, and the work it takes to learn what path to walk for yourself.

More on the path I walked and how I'm grateful for where I'm from in a later post.